"A good listener is not only popular everywhere but after a while he gets to know something."

"For if the disciple obeys with an ill-will and murmurs, not necessarily with his lips but simply in his heart, then even though he fulfill the command yet his work will not be acceptable to God, who sees that his heart is murmuring. And, far from gaining a reward for such work as this, he will incur the punishment due to murmurers, unless he amend and make satisfaction."

"Keep your eyes and ears wide openùand your mouth closed, if you wish to acquire the habit of prompt decision."

"Throughout our lives, we collect and accumulate all kinds of thingsùfrom pots and pans to cherished old photographsùto help us make the journey from one milepost of life to the next; but often the accumulation of savings accounts and hope chests can weigh us down, preventing us from moving on in our livesùthe wealth and prosperity that should enable our journey become more important than the journey itself."

"Education is not the filling of the pail,
but the lighting of the fire."

"The dreamer is a winner. The daring-to-try person is a winner. It is impossible to be a total loser if you will only start. ThatÆs because the person who begins has won the battle over inertia.

Some of you are failures for only one reasonùyou donÆt dare to start. If you dare to begin, you will surely win at least round one."

"We must all suffer from one of two pains: the pain of discipline or the pain of regret. The difference is discipline weighs ounces while regret weighs tons."

"Few men during their lifetime come anywhere near exhausting the resources dwelling within them. There are deep wells of strength that are never used."

Excellence is a Habit

"Excellence is an art won by training and habituation. We do not act rightly because we have virtue or excellence, but rather we have those because we have acted rightly. We are what we repeatedly do. Excellence, then, is not an act but a habit."

"Teams donÆt work because of conformity. It is diversityùlinked by a common vision that creates the magic. ThatÆs the surprising truth about team building."

"Lord, You invite all who are burdened to come to you. Heal me with your healing hand. Touch my soul with Your compassion for others.

"Champions are not made in the gyms. Champions are made from something they have deep inside themùa desire, a dream, a vision."

"Peace does not dwell in outward things but within the soul; we may preserve it in the midst of the bitterest pain, if our will remains firm and submissive. Peace in this life springs from acquiescence to, not in an exemption from, suffering."

"The real art of conversation is not only to say the right thing in the right place, but, far more difficult still, to leave unsaid the wrong thing at the tempting moment."

"The very impulse that causes some to look for revelations and unusual signs is present in many, perhaps most, religious people to some degree.àWhat we really need is not extraordinary signs of this presence in visions and revelations, but a sense of reverent attentiveness to this religious experience as it comes to us in ordinary ways.àAs St. Augustine poignantly wrote: æThe only thing I really fear is Jesus passing by.Æ"

"Good is the enemy of great.

Few people attain great lives, in large part because it is just as easy to settle for a good life. The vast majorityànever become great, precisely because the vast majority become quite goodùand that is their main problem.àGreatness is not a function of circumstance. Greatness, it turns out, is largely a matter of conscious choice."

A wise man once said that all of fallen human history is sandwiched between two questions. The first is, "What could it hurt?" followed sometime later by the second, "How was I supposed to know?"

Wisdom teaches us that both of these questions are when you boil it all downùdumb!

A youngster asked his father, "Dad, do all fairy tales start with, æOnce upon a time?Æ

The father replied, "No, son, some of them start with, æWhen I am electedàÆ" 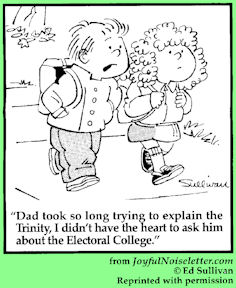