"Perhaps the most valuable result of all education is the ability to make yourself do the thing you have to do, when it ought to be done, whether you like it or not."

"When one has a dream, he is a success, for the dreamer cannot be a total loser. It is impossible to have a dream and be a total failure. The dreamer has already succeeded over despondency, despair, cynicism and depression. These alone can defeat many of us. Most of us do not even dare to dream.

That is why I say that the person who has a dream is already a winner."

"The journey of life is learning who you are, how you can become your best self, coming closer to God, fulfilling your eternal destiny.

You are a distinct being, totally separate from everyone and everything around you. The only thing you have in common with other human beings is that no two of you are exactly alike."

"Mistakes are a fact of life. It is the response to error that counts."

"When patients complete tests at the Mayo Clinic they are given a card on which there is a diagram in the from of a cross. On each arm of the cross appears a word indicating a main factor in leading a balanced life. The four words: Work, Play, Love and Worship."

"The pessimist describes life as sorrowing, suffering and succumbing;
the optimist thinks of it as growing, giving and gladdening."

"Pessimism is a contagious disease;
optimism is a miraculous medicine."

"What is niceness? It is a complex mixture of such traits as self-respect, respect and consideration of others, courtesy and manners, pleasant personality, good humor and thoughtfulness.

The sum of these characteristics is what is called niceness. Other qualities contribute to that perception and are probably part of niceness. These include honesty, loyalty, character, forthrightness, dependability, honor, sense of fairness, tolerance and empathy."

"Humility is just as much the opposite of self-abasement as it is of self-exaltation. To be humble is not to make comparisons. Secure in its reality, the self is neither better nor worse, bigger nor smaller, than anything else in the universe. It is—is nothing, yet at the same time one with everything. It is in this sense that humility is absolute self-effacement."

"It’s the little things that make the big things possible. The close attention to the fine details of any operation…makes that operation first-class."

"When making any request, whether it be of yourself, the universe or another person, be as specific as possible. The two important aspects of specificity are how much and by when. How much do you want and by when do you want it? You may not get it exactly when you want it, and you may! But in either case everyone involved is now clear."

"Do what you can
With what you have,
Where you are."

"A man is literally what he thinks, his character being the complete sum of all his thoughts.…

Man is made or unmade by himself; in the armory of thought he forges the weapons by which he destroys himself; he also fashions the tools with which he builds for himself heavenly mansions of joy and strength and peace."

A parable tells about a martial artist who kneels before a master sensei in a ceremony to receive the hard-earned Black Belt. After years of relentless training, the student has finally reached a pinnacle of achievement in the discipline. "Before granting the belt, you must pass one more test," the sensei solemnly tells the young man.

"I’m ready," responds the student, expecting perhaps one more round of sparring.

"You must answer the essential question: What is the true meaning of the Black Belt?"

"Why, the end of my journey," says the student. "A well-deserved reward for my hard work." The master waits for more. Clearly, he is not satisfied.

The sensei finally speaks: "You are not ready for the Black Belt. Return in one year."

As the student kneels before his master a year later, he is again asked the question, "What is the true meaning of the Black Belt?"

"It is a symbol of distinction and the highest achievement in our art," the young man responds. Again the master waits for more.

Still unsatisfied, he says once more: "You are not ready for the Black Belt. Return in one year."

A year later the student kneels before his sensei and hears the question, "What is the true meaning of the Black Belt?"

This time he answers, "The Black Belt represents not the end, but the beginning, the start of a never-ending journey of discipline, work and the pursuit of an ever higher standard."

"Yes," says the master. "You are now ready to receive the Black Belt and begin your work."

A story is told that when Leonardo Da Vinci was working on the painting of "The Last Supper," he would spend hours, even days, just looking at the canvas. Then he would take a brush and add only one or two strokes. The monks in the monastery where he was working complained about the slow progress he was making. Da Vinci responded, "When I pause the longest, I make the most telling strokes with my brush."

How true! We make the most telling strokes in our lives, when we pause the longest—in prayer! 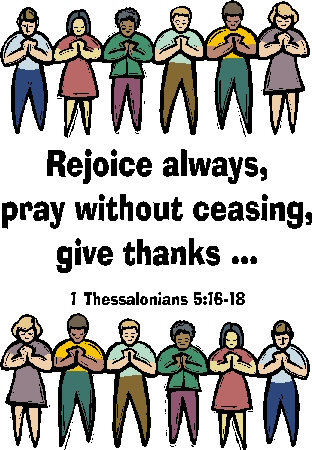