"Teaching, like study, is clearly both formal and informal. The parent can lecture as much as the professor. The grandparent can be concerned with the little one’s souls as much as the priest. Even friends and peers are teachers. They push and prod our clay, leave considerable impact on our meaning, our reality. Like it or not, each day we are lectured by a variety of informal professors on the ways of the world, both for good and for bad."

"Though we travel the world over to find the beautiful, we must carry it with us or we find it not."

"There are times, of course, when it is tempting to simply gripe or surrender to discouragement or give in to everyday pressures. But determination and patience are part of any formula for success. In the face of frustration, keep these truths in mind.
One idea can launch a revolution of the spirit.
Perseverance is the real fuel of accomplishment.
The individual is the greatest force on earth."

"When you ask people to do something, be sure to also tell them why. Its well worth the time and effect.

Its very easy for a busy person to fall into the habit of simply telling people to do things without further explanation. It seems like the quickest and easiest way to get things done.

But it’s rarely the best way. When you ask someone to do something, take time to explain why. Its an excellent habit with a lot of good side effects."

"Many talented individuals fail for lack of enthusiasm. I truly believe that a mediocre idea that generates enthusiasm will go further than a great idea that inspires no one. To motivate others, you must be able to arouse enthusiasm in people. And in order to accomplish this, you yourself must first be enthusiastic."

"Everything man [and woman] creates or acquires begins in the form of desire, that desire is taken on the first lap of its journey from the abstract to the concrete into the workshop of the imagination, where plans for its transitions are created and organized."

"It’s good to have money and the things money can buy, but it’s good, too, to check up once in a while and make sure you haven’t lost the things that money cannot buy."

"Your family and your love must be cultivated like a garden. Time, effort and imagination must be summoned constantly to keep any relationship flourishing and growing."

"Spirituality points, always beyond: beyond the ordinary, beyond the narrow confines of the self, and–above all–beyond expectation. Because ‘the spiritual’ is beyond our control, it is never exactly what we expect."

"Daring to do what is right, not what fancy may tell you, valiantly grasping occasions, not cravenly doubting–freedom comes only through deeds, not through thoughts taking wing.

Faint not nor fear, but go out to the storm and the action, trusting in God whose commandment you faithfully follow; freedom, exultant, will welcome your spirit with joy."

As you contemplate this question, you will experience it’s amazing power. Because eventually we will be faced with that actual last opportunity. And we never know when it will be."

"Within you right now is the power to do things you never dreamed possible. This power becomes available to you just as soon as you can change your beliefs."

Two lumberjacks were in a tree-cutting contest. Both were strong and determined, hoping to win the prize. But one was hardworking and ambitious, chopping down every tree in his path at the fastest pace possible, while the other appeared to be a little more laid back, methodically felling trees and pacing himself.

The go-getter worked all day, skipping his lunch break, expecting that his superior effort would be rewarded. His opponent, however, took an hour-long lunch; then resumed his steady pace.

In the end, the eager beaver was dismayed to lose to his "lazier" competition. Thinking he deserved to win after his hard work, he finally approached his opponent and said, "I just don’t understand. I worked longer and harder than you, and went hungry to get ahead. You took a break, and yet you still won. It just doesn’t seem fair. Where did I go wrong?"

The winner responded, "While I was taking my lunch break, I was sharpening my axe."

Only One Way To Play The Game

Winning is only worthwhile when you win with your principles intact. Although there is no more emphasis on winning in this generation that there was in any other, sometimes it seems that nowadays we’re talking about winning at all costs.…

In the 1925 U.S. Open, the famed golfer Bobby Jones penalized himself a stroke when his ball moved slightly in the rough and the blade of his iron touched the turf. No one could possibly have seen the ball move. The penalty dropped Jones into a tie with golfer Willie McFarlane, who went on to win the playoff. 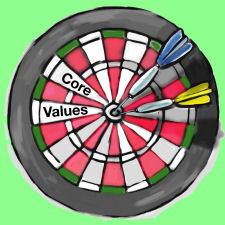 More than a half-century later, in the 1978 Hall of Fame Classic at Pinehurst, NC, Tom Kite did the same thing. His self-imposed penalty stroke caused him to lose the tournament. When reporters asked both men why they took the penalties, they both said essentially the same thing, "There’s only one way to play the game."

In sports, in business, and in life, there’s only one way to play the game. Winning, with your values upheld, should be celebrated. But winning in any other manner isn’t winning at all.