Only Hope to Live

"Let any man examine his thoughts, and he will find them ever occupied with the past or the future. We scarcely think at all of the present; or if we do, it is only to borrow the light which it gives for regulating the future. The present is never our object; the past and the present we use as means; the future only is our end. Thus, we never live, we only hope to live."

"I pick my favorite quotations and store them in my mind as ready armor, offensive or defensive, amid the struggle of this turbulent existence."

"A keen sense of humor helps us to overlook the unbecoming, understand the unconventional, tolerate the unpleasant, overcome the unexpected, and outlast the unbearable."

"Iíve never been surprised by Godís judgment, but Iím still stunned by His grace."

You are Your Own Greatest Asset

"There comes a time when you get to bed and hit the pillow. You are alone with your thoughts and you take inventory of yourself, your assets and your liabilities. Then you should ask yourself what you forgot to do during the day.

ÖWhat did you forget today? Think of one thing you donít want to forget tomorrow. It will make you relax. Take stock of yourself. It will improve your self-image and give you peace of mind for tomorrowís goal."

"Friends always answer when you call, reach out and help you when you fall;
they strengthen you in times of stress and add much to your happiness."

"Indecision is the seedling of fear!ÖIndecision crystallizes into doubt, the two blend and become fear! The blending process often is slow. This is one reason why these three enemies are so dangerous. They germinate and grow without their presence being observed."

"Wisdom is knowing what to do next.
Skill is knowing how to do it.
Virtue is doing it."

"All spiritualityóbut especially a spirituality of imperfectionóinvolves the perceiving, embracing, and living out of paradox. A ëparadoxí is an apparent contradiction: Two things seem to exclude each other, but in truth need not do so.ÖOpenness to paradox allows both the understanding and acceptance of our human condition as ëboth/andí (both a saint and a sinner) rather than ëeither/orí (either a saint and a sinner)."

"Get involved in something that you care so much about that you want to make it the greatest it can possibly be, not because of what you will get, but just because it can be done."

Life is a Grindstone

"Life is a grindstone; whether it grinds you down or polishes you up depends on what youíre made of."

"The tragedy of life is in what dies inside a man while he livesóthe death of genuine feeling, the death of inspired response, the awareness that makes it possible to feel the pain or the glory of other men in yourself."

"Character is a quality that embodies many important traits, such as integrity, courage, perseverance, confidence and wisdom. Unlike your fingerprints that you are born with and cannot change, character is something that you create within yourself and must take responsibility for changing."

"To accomplish great things, we must not only act, but also dream; not only plan, but also believe."

A television talk-show host once said that commitment is made up of three stages. First, thereís the fun stage. Thatís when we go out and say, "I love doing this. Why didnít I get involved sooner?

Second, thereís the intolerant stage. Thatís when we go out and say, "Anyone who doesnít get involved isnít really a true believer."

Finally, thereís the reality stage. Thatís when we suddenly realize that our involvement is going to make only a microscopic dent in the problems of the world. And thatís the stage at which saints are made.

What is the stage of your faith commitmentófun stage, intolerant stage, or reality stage?

Johann Gutenberg is a superb example of creative thinking. What did he do? He simply combined two previously unconnected ideas to create an innovation. He refused to limit his thinking to the singular purpose of the wine press or the solitary use of the coin punch. One day Gutenberg entertained an idea no one else had ever thought of: "What if I took a bunch of coin punches and put them under the force of the wine press so that they left their images on paper instead of metal?" From that creative idea the printing press was born. 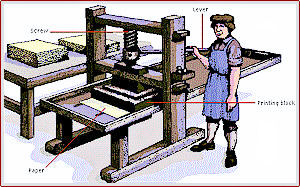 Model of the Gutenberg Press